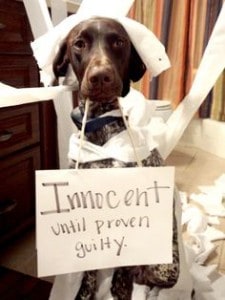 Online dog shaming has become a popular phenomenon since the advent of social media. You have probably seen dog owners post various pictures of their criminally-inclined pets chewing shoes, sofas, toilet rolls – the list goes on…

These actions reflect the feeling humans have when their fur babies misbehave. But do canines understand the lingering effects of their actions, or are they simply trying to please their owner?

A large number of studies have been conducted and the common outcome is dog’s don’t feel or display guilt. According to the veterinary scientist Doctor Susan Hazel, it’s just not the way their brains are wired.

In a recent study, food was placed in a room and when the owner returned, it was tested whether the perceptions of the animal’s guilty look matched the facts. Observing their dog’s reaction, owners could not tell if their dog ate the food or not. You may think the pup would have shown sorrowful eyes full of guilt, but that was not the case.

The truth is, over thousands of years, dogs have adapted to living with humans and will show appeasement-like behavior that some owners interpret as guilt. 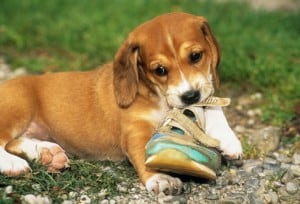 Cruel Shamming: Your Dog Is Confused

Canines are intuitive geniuses and often sense what we need before we even know it. According to Dr. Hazel, 20 percent of dogs suffer from separation anxiety and that often leads to all sorts of behaviors, such as chewing shoes or a sofa. When asked if dog shaming is cruel, Dr. Hazel replied saying that dog’s are often confused more than anything. The best time to discipline is in the act, not after the fact. Your pup can sense you are upset, but often can’t make the connection to why their owner is upset – they just want to keep their “food provider” happy.

Next time you find yourself humiliating your dog for something they did two hours ago, you may want to think again and let it go.

Reader – How does this change your future reactions towards your fur baby?

Also Read: New Study Shows Why and How Your Face Excites Your Dog